The Beginnings of a Pink Victorian Bedroom

Last spring I quit my part time job with the intent of getting some much needed work done around the house and maybe think about adding child #2 to the mix after a few months. I put in my 2 week notice and discovered I was already pregnant. Whoops! So much for being productive, I spent my new found free time staring blankly out the window from the couch. That is all said and done now but my free time is spent on feedings so I have have gained negative free time since I quit my job. I did get some non-toxic work done around the house last summer, mainly cleaning out the spare room since we now would have 2 children to house. Sure, they could share (and #1 really wants to share) but who wants the baby waking up the pre-schooler and vice versa? 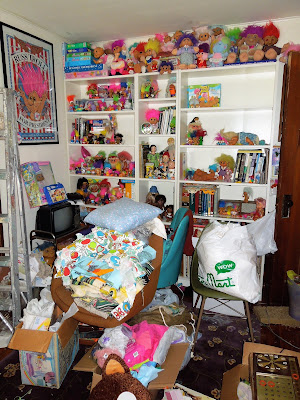 Cleaning out a spare room isn't a problem for a normal person. Get rid of that futon, the desk, shelf of knick-knacks and maybe some old college books. On my side though it meant cleaning a room which I stuffed everything I didn't know what to do with for the past 5 years - another reason for the kiddos not to share since we weren't REALLY using this room for anything anyways! I had already boxed up some of my trolls here because I definitely am not one to have empty shelves. 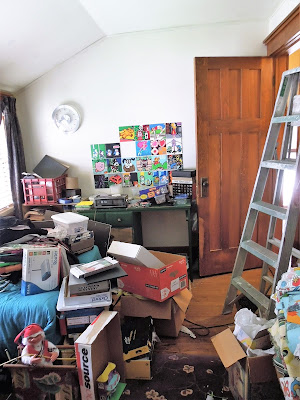 Here is proof the room did indeed look like it was straight out of an episode of hoarders. Minus the rotting food and feces. The trolls are packed away under the eves in the back of my closet and a bunch of stuff went to the garage sale. Though don't go in the basement!

I asked #1 if she wanted to stay in her room or pick colors for the new room and move. She wanted to stay in her current room but paint it pink, get new curtains etc. I told her only one room was getting painted and since the green room was the only bedroom which has been painted in the past 30 years, it wasn't going to be that one. She must have really wanted a pink room because she opted to move down the hall.

This is the repair work I did do to the walls/ceiling. 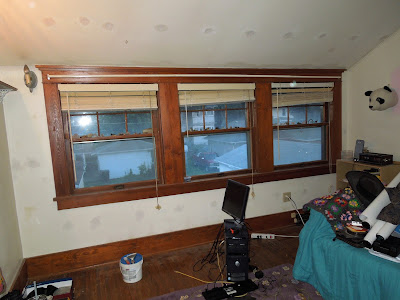 The insulation holes were still showing! So those are officially patched. What I didn't do at 7 months pregnant was strip off 3 layers of wallpaper with 3+ layers of pain over the top. Which is OK because the wallpaper does a pretty good job of covering any plaster cracks! The ceiling had fresh drywall on it already so that looks good.
The room is painted BUT not much else has been done. She also was very specific and wanted her "new" furniture to be Victorian. We went shopping in my parent's garage and since the furniture I grew up with in my bedroom was from that era, we just dug that out. 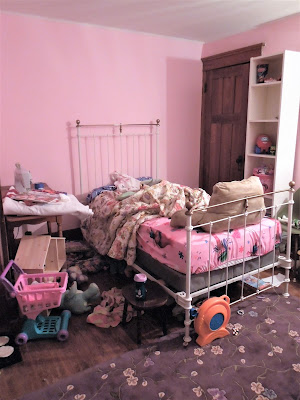 I haven't had time to do anything else! This side was my wall of troll shelves. My sewing machine hasn't even left the room. Poor kid. Luckily her sister isn't officially in her old room yet so she still goes back and forth with her toys. Plus she is four so does she notice she has no pictures or shelves up? It doesn't seem to bother her any! She's got some new Trolls sheets and some Hello Kitty Christmas lights hung up as a night light so she's good. She picked out the color herself and I was hoping she would opt for something other than pink but nope, I painted a sample on the wall and she declared "it was beautiful!" so that was it. I was afraid it was going to look like a Barbie Dreamhouse in there but I actually like it. 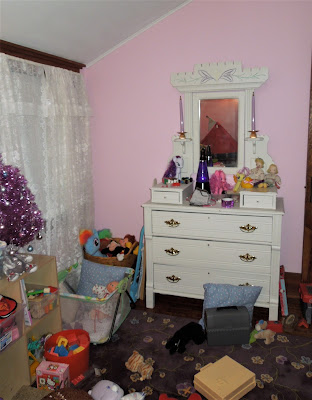 Yep, no staging here. This is it! Hopefully some decorating will happen. I imagine myself carefully staging everything, getting some good lighting and taking some fancy photos...oops, gotta go! Someone is having some juicy gas across the room and I'm hoping it's the baby.

Finally! We Have Some Bookshelves Behind the Door

I believe this is something I pinned on Pinterest 4+ years ago? while I was planning my nursery. 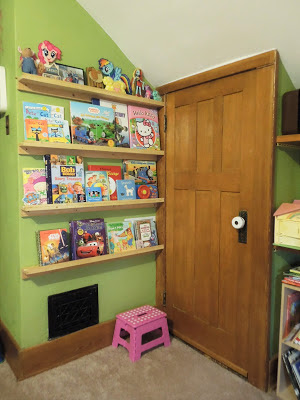 I was just going to nail/glue some boards together, put them on the wall and call it good enough but when my dad heard this plan he was all "no, no, no, you need to use biscuits and blah, blah, blah" OK dad, I know you are right but you have to help me! So 4 years later, here we are BUT the good news is a child could climb up these and they will be fine - pending the whole wall doesn't fall down. 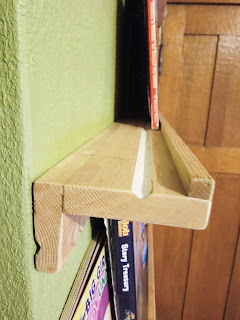 Since I am cheap and like to recycle, I used some of the knotty pine paneling I took off the bathroom wall and have hoarded down in the basement which means these shelves cost me $0. I'm not sure what my dad spent on biscuits and glue, under $3? I might stain the shelves to match the woodwork someday though that will be another 5 years down the road.
Posted by Cara at 5:13 PM 1 comment:

Dryer "Installation" Drama and Craigslist to the Rescue

As much as I enjoy our funky 1970's kitchen, I assumed one/all of those 40 yr old appliances would be next on the replacement list but alas it was our 6 year old dryer, purchased new, which quit. I was hoping it was the belt but we took it apart and it was something in the motor (my dad had a fancy name for it) so he basically advised us to get a new one. If he thinks it's not worth repairing, then it's not worth repairing. I was thinking go with a refurbished one but the husband was whining about it so FINE he can pick out a new one. I line dry all of the kids and my clothes and the sheets so, apart from towels, he's the only one who uses it. Yes, I will cater to his laundry needs since he does his own laundry!

We found one we liked at Lowe's on sale though the first indication I was not going to be a happy camper about this process was they required us to buy a new cord. "We don't know the current condition of the cord you own" Umm, OK, I do because it's not very old but whatever, it was $15. He asked about the dryer vent hose and I told him that was good - we have a solid metal duct. Haul-away for the old one was $15. I guess, just do it so I don't have to worry about dealing with it!

Delivery day came and they show up, bring in the dryer and ask where I want them to put the old one. The husband had taken the receipt at the store while I had taken little one to the bathroom so I didn't even double check but the other $15 charge on the receipt turned out to be a new crappy accordion dryer vent hose instead of the haul-away fee. OK? The only thing I could have them do is shove it to the side. The guy asked if I wanted to use the old vent and I told him yes, PLEASE! thinking I could return the crappy, lint collecting one. I wasn't paying attention but the next thing I know he couldn't get my old vent pipe/duct onto the new dryer so he whipped out the accordion hose. I informed him not to worry about it, we could finish it up. I really just needed someone to help haul it down into the basement. "oh, no, no, I've got this!!" The accordion one was too small to fit onto the main duct piece which vents outside - at which point I should have told him to leave my house immediately but I am terrible at being a b**** to someone I don't know. He ended up using a piece of my solid duct for the top, attaching the accordion to the bottom of that, wadding up the excess and stuffing it behind the dryer. Yes, you read that correctly, he literally wadded 5+ feet of already-prone-to-collecting-lint hose and stuffed it behind the dryer. Seeming very satisfied with his work he FINALLY left. I was left with a messed up dryer vent and a non-working dryer.

I had no clue what to do with the old dryer and figured I might as well try Craigslist and if someone does happen to show interest, hope it doesn't turn out to be a mass murderer. Someone messaged almost immediately, came promptly wearing an appliance repair-like outfit, had a fancy appliance cart and hauled it away. He didn't even need any help. Geez, OK, next time I know save the haul-away fee because that required almost no effort on my part.

The moral of this story is next time I will try to avoid a big box store for my appliance needs and try for someone more local. Though we have 1? local appliance store I can think of which sells new appliances. So my options are REALLY limited! 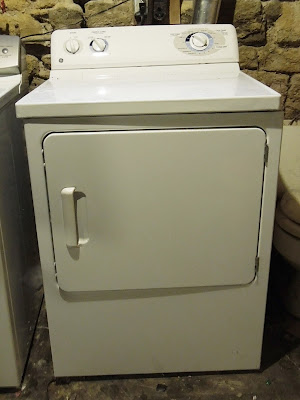 My old dryer. I had no real connection since I rarely used it!
Posted by Cara at 4:28 PM No comments:

What is this? Yes, I am still alive and believe it or not, I have been working on stuff and taking photos thinking all along I would be doing a blog post. See, here is proof. I finished the last section of wall in the living room before Christmas...or is my tree still up??? Maybe. No, the husband starts whining mid-January when it's still up. Party Pooper. 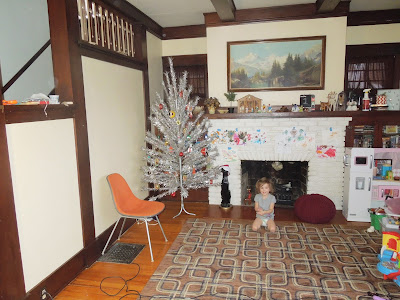 The main project I had done recently was the chimney. Water was coming in around the chimney and I just assumed it was the flashing and started calling roofers to see if they could check it out. I think I called 8? 9? roofers and ONE showed up. He came down from the roof and showed me this photo: 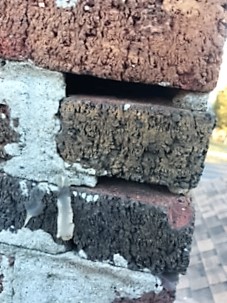 Yikes! I knew the joints in the chimney were bad but I didn't realize they were this bad. We figured this is were the water was coming in so then I had to start the process of who does tuckpointing? The roofer knew a guy so I thought he would come out and give me an estimate but the roofer just called me back and said his guy "did" chimneys for $600.  He "does" chimneys? what like takes a bag of cement and slathers it on? I moved on to a company who has done a lot of historic buildings around town and they gave me a $4800 estimate. What!? Next. I found another company who also works on historical buildings and also the owner lives a few blocks from here. They gave me a $1300 estimate which seemed like a happy medium to me. Maybe it's still expensive? I don't have any experience on masonry estimates. Also, I don't have too much of a choice of contractors who correctly work on old houses around here and I wanted my chimney to look nice! 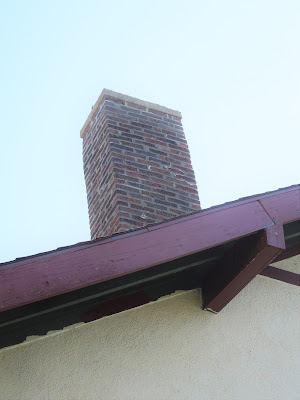 Sorry, I'm not climbing on the roof just to get an "after" shot but you can see white blob areas on the brick where someone had previously gone up and just caulked missing joints.

I didn't like the fact they randomly showed up at my door early one morning. Possibly the disadvantage of him living close "oh, my guy got back into town late last night so we thought we would pop by and see if he could get started" BUT I am pleased they came right out as soon as it got warm enough and it is all done before the spring rains