I'm in the process of kitsching up my bathroom and maybe, just maybe I will have photos by the end of this weekend? I mean really, I have a whole extra "free" day to work on it! Since Frankie (and the dog) moved to the basement the dog cannot wander in and piddle on my rug and shower curtains now so I really don't have an excuse.

This find from the salvage store came just in time as I hadn't motivated myself to re-hang the probably $2 towel ring which came with the house. It takes a whole 5 minutes to do after all! Most of which is spent walking to the basement and finding the drill. 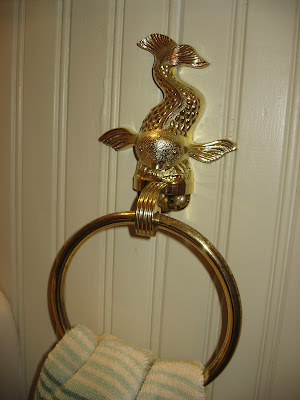 A lovely kitschy Hall-Mack towel ring. I would call it a fish but I guess its official title is dolphin.

Unfortunately I did have to buy this entire box to acquire it: 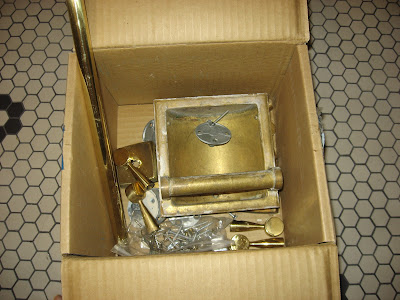 It is all Hall-Mack but the soap dish is gross with finish wear, not to mention I have no spot for it. There is also a plain gold towel rack and part of a toilet paper holder?? - both rather forlorn and not fish related.
Posted by Cara at 3:34 PM 2 comments:

Just an update about my brother's quest for a house. As you may recall from the post here they lost the seller of his original house. All she had to do was sign over the title and take his check but no one ever found her to finish this last task. I do feel bad for the house because it is really nice and there is all of that fun stuff inside. Darn her! Where did she go?? and now how will she get rid of the house? No one in town is going to list it for her and she obviously isn't going to be able to handle a for sale by owner. The utilities are all still on and she'll have to continue to pay taxes. And yard work? The city will fine her for that one I guess...if they can find her...
He decided it was time to move on and this time I am even more jealous of his find. I will try not to curse it again with a full blown story but it is a fantastic Italianate/Victorian on a double lot. The parts that make me most jealous are the decent sized kitchen, attached garage, cute gardening shed, back staircase and, last but not least, 2 full bathrooms - one a complete original 1900 bathroom and the other is in the 50's addition off the back and, you guessed it, it's pink! I told him I will buy this house from him when he is tired of it, no joke! My only contingency is he has to keep the bathrooms. I already heard him say something about needing to find pink rugs so it sounds like he is taking me up on my offer, though I'll help him man it up a little - black or gray rugs would look better than pink anyways. It is a short sale so he only has to cough up 65Kfor it (OK, a little more with interest and what not) but he isn't closing until July ugh, I hope it's worth the wait and the seller doesn't mysteriously vanish this time!
Posted by Cara at 6:57 PM No comments:

We did get some productive garage saleing done this weekend so it wasn't a total waste! I've been trying to stick to practical items but it's hard to resist some new additions to my ever  expanding troll family. 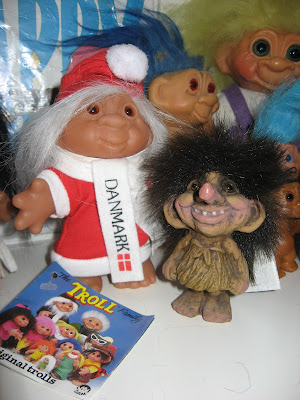 Both are in such good shape and include their original tags. Plus I suspect they are actual souvenirs from oversees as the Nyform one (on the right) has a $14 price tag and even small ones like this run $35-$45ish? at the stores, er, store I have seen them at here. I've only bought them used and cheap because most people are terrified by them so I'm not up on current new prices.

My other find was an addition to my other problem: 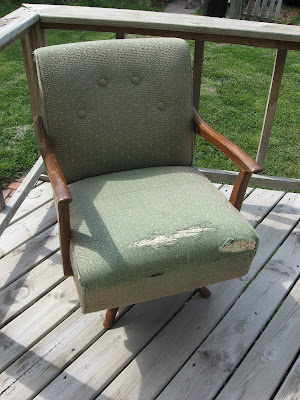 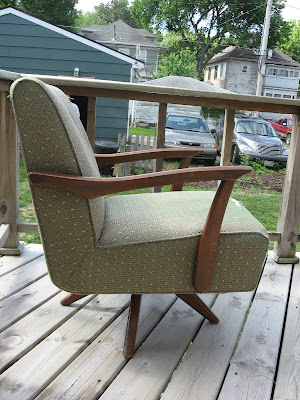 But hey! Even this is practical as I've been looking for a vintage rocking chair for the nursery which doesn't have that wicked looking rocking contraption underneath that looks like it would be catching arms and legs of both the cat and the child if one wasn't careful. The chair looked so forlorn sitting out in the parking lot so I couldn't resist also it was cheap and proceeds went to charity so it was a win-win. As my mom and I were excitedly hauling it off I heard one of them saying "I can't believe someone bought that chair!" Ha! I heard that!

"You're going to put this gross thing in our child's room?" was basically Mark's response. No worries, it is actually very clean and sturdy - just the fabric is a little well used. My mom and I went straight to the fabric store and I actually found a nubby orange upholstery fabric which will hide barf stains and blends with the curtains on super duper clearance. Umm, does that normally happen? No! I was going to start chopping at it last night but the cat claimed the chair as soon as she spotted it and decided it was her napping spot for the evening.

It is tagged Paoli Chair Company, Inc. on the bottom along with a 1960 date. It looks like the company/a variation of the company is still in business today as I found a website for them.

This weekend was not productive. In fact, I feel it is regressing more around here than progressing.

We had to clean out our relatively new (30 yr old) sewer line last summer and they didn't find any tree roots etc. so we were hoping it was a fluke and it just needed a good cleaning but nope, it's backing up again. We called the city hoping it was their 125 year old line but they claim nothing is wrong on their end so it has to be ours. Hopefully someone can come quick, unplug us and run a camera down to find the exact culprit of this situation. Also, hopefully this situation is not occurring under the driveway slab.

The ants have swarmed the kitchen again. Didn't I have this problem the first summer here? Why yes I did but the ants fell for my traps and gradually died off. This year's crop seem indifferent to my traps despite their obvious attraction to the grape juice which mysteriously appears on my counters every morning.

The air conditioner exploded water all over the basement as it was extra humid on Saturday and something clogged up the hose.

Last but not least, termites! Didn't we have the house treated for termites before we moved in? Yes, yes we did but my dad found a few on the garage. This was the front middle post which is by itself, the last section of the garage he was repairing and he hadn't seen any others anywhere else. We put some termite killer on it and are hoping that will take care of them and it's not a widespread problem...yet? We'll see about that. Since my dad fixed most of the trim on the garage this weekend hopefully it doesn't just get eaten up again! 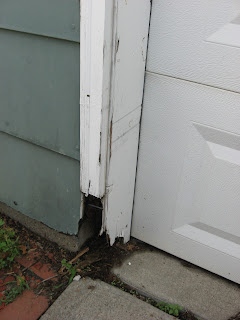 This was the damage done by previous termites and water. 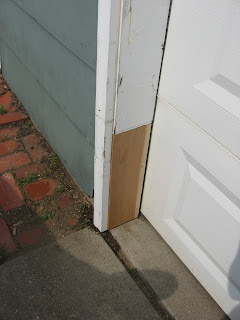 It now looks like this. Yay! Nothing big or exciting but every little bit around here helps. 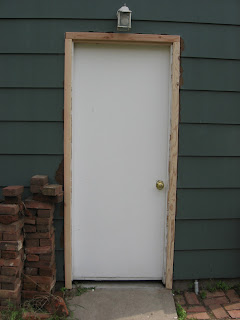 Around the door frame is also fresh and new.
Posted by Cara at 7:25 PM No comments: