Once again I inadvertently had a theme going with my garage sale finds last weekend. First off I found this salt and pepper set which made me laugh. 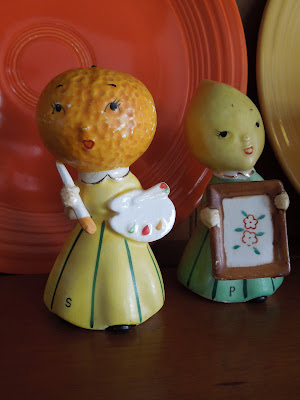 It always makes me wonder what someone's thought process was while designing some of these crazy things. Really, who sat down and said "happy fruit artists wearing dresses will be an excellent theme for a salt and pepper set!"

I'm also always looking for odd 70's/80's hot pads I can use without guilt since I know they will get stained and dirty so I picked up this one up. 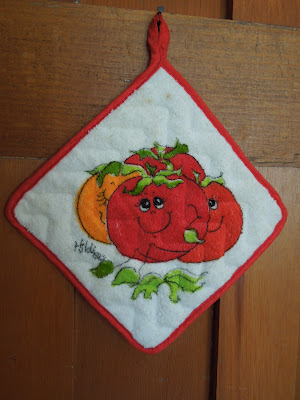 P.S. One advantage of having a husband who doesn't enjoy the world garage sales is he volunteers to stay home with the baby and tells me to have fun and get out of the house for a while. Score!
Posted by Cara at 9:00 AM No comments: 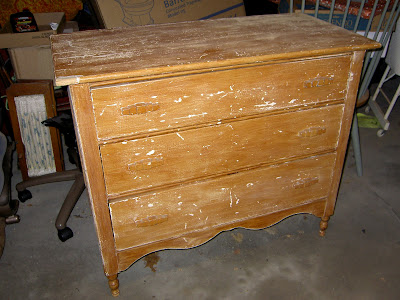 The before shot of my inherited? saved from the dumpster? changing table/chest. It sat in my grandparent's basement forever, always with the guest sheets and misc. linens inside. My dad doesn't even remember where it came from as he said it was always sitting at their old house too. We were hoping someone else saw potential in it but $10 at the estate sale didn't sell it and none of us could stand to leave it in the house for the house flipper so my parents took it. It then ended up in my garage as I had mentioned maybe I could use it as a changing table. It was antiqued in the 70's and obviously needed fresh paint. 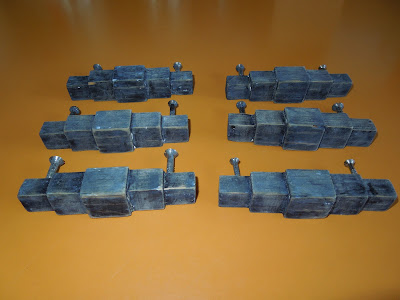 The handles are the best part because instead of going out and buying a set, my grandpa made them. They have a funky art deco look and after the chippy layers of paint were removed a smooth black paint remained. I wanted to somehow give them a Bakelite feel and already had picked up the orange paint at free paint day at our salvage store so the black paint was perfect. 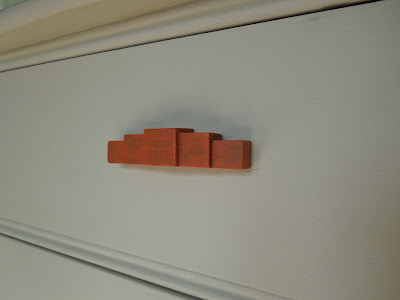 Well, it helped give them an aged/toned down look anyways, otherwise they would be bright "Jungle Orange". The white paint also came from free paint day and I lined the drawers with paper from the baby shower (everyone makes fun of me for my meticulous package opening but ha! it paid off) 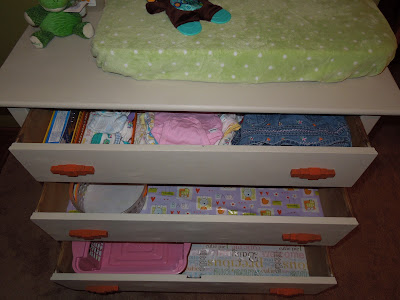 so the total cost of this project? $0! I guess I did pay .50 for the 4 baskets to help organize the drawers if that counts? and we may have also used up a couple chunks of sand paper. 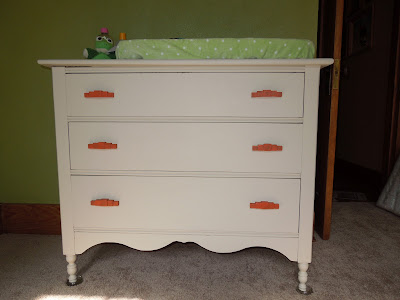 My blog has been sparse lately due to our new family member! 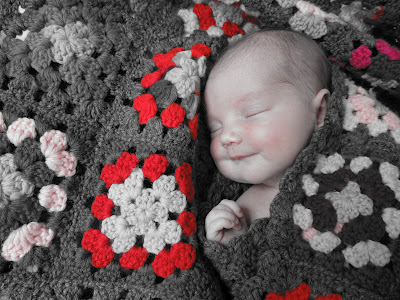 Lucca was born on August 8th and I can't believe it has already been 3 weeks! Mark was home the first week and a half then my mom has been here. Since everyone has gone back to work/home I should have more free time? It's true, my mom was good at helping with the mundane chores but we also just found ourselves sitting around chatting most of the day so I didn't get to work on my list of ever growing projects which is my usual entertainment. Now that I can inhale toxic fumes once again I'm looking forward to some furniture projects I have accumulated and whatever else I can fit in between feeding and entertaining a new baby. I have to get her started early on the garage sales and painting so she can help and join in on my adventures!
Posted by Cara at 11:42 AM No comments:

The garage sales have been sparse around here probably mainly due to the constant 100+ degree weather. With Frankie still waiting for papers to go through on his "short" sale house purchase, we are definitely on overload here so I've been trying to limit myself to small and/or practical (ha) items. This weekend I did buy a chest of drawers (what did I just say about small??) but otherwise I have only found a few random odds and ends. 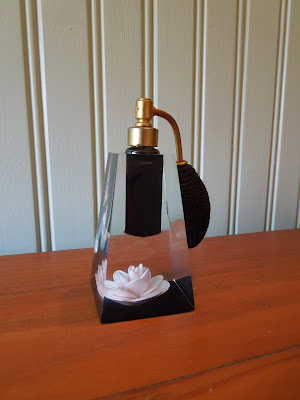 a Lucite perfume with a carved out flower in the middle. 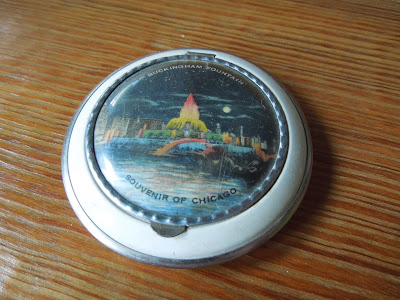 and a tacky souvenir compact. Both of which will look cute on my vintage guest room dresser...whenever I get that room set up!

Yesterday my mom bought a bag of minis and for some reason?? had no interest in keeping this little guy. 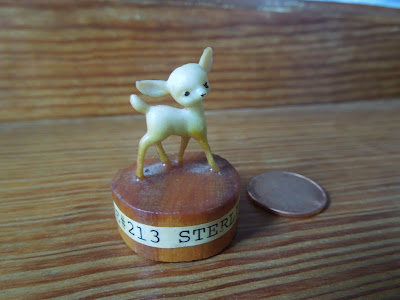 Why yes, it is a teeny deer super glued to a wood base with a hand typed label and to top it off it is also a pin! Just looking at this, I would want to date it maybe from the 1970's but upon further inspection: 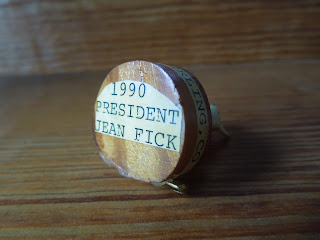 1990?? I don't know why I am shocked. Thinking back, the typewriter was still being used in our home at this time and I'm pretty sure I have seen these deer still available at Hobby Lobby.

Just to let Jean know, wherever she may be, I will be enjoying her deer pin and perhaps I may even find an occasion to wear it. It looks like a good conversation piece to me!
Posted by Cara at 1:00 PM No comments:

Me? Choosing to install Carpet?

I really like wood floors, especially old wood floors so I'm not really into the whole wall to wall carpet thing but I am making an exception for the nursery. I obviously shouldn't be staining things at the moment not to mention the time constraint. The floors are soft pine so no easy drum sanding. Plus this room is above the only somewhat enclosed front porch so any added insulation is a bonus. 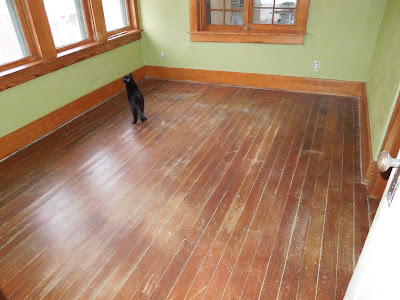 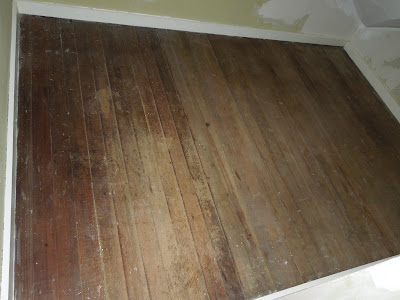 These are the floors which will be waiting for me if I ever "need" a project in the future and/when the carpet gets too gross for me. 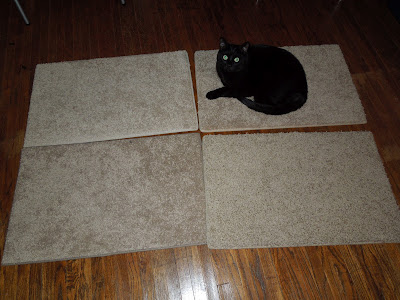 The last time I picked out carpeting I was 6 and the carpet was pink so I had no clue what went into the process. I pondered over samples for a week, picked out one for the room, a cheaper coordinating one for the closet and went back to the carpet store. I asked if they had any remnants thinking I could find an even cheaper piece for the closet and the salesman responded by saying they would have someone come out and measure so I would know what size of remnant I should find. OK, sounds good. Mark and I went back after the measuring guy came and the salesman told us the size/sizes of remnants we would need. We both continued to stare blankly at him before he realized we did not know where their remnant collection was. He chuckled a little and led us back to the warehouse where we discovered the place was lined with 1000's of remnants. Whoa, OK, I was expecting 20 of odd sizes/colors. We found a remnant which fit both the closet AND bedroom almost exactly AND it was the right color. I definitely wasted my time wandering around the showroom floor feeling up carpet samples but now I know. 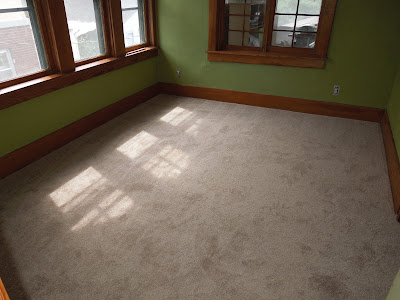 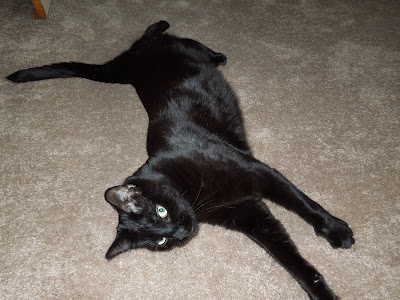 Cammie says "thanks guys for the carpet in my room, I really love it!"

Room remodeling goes a lot faster with no putsy plumbing or electrical work. These are the before shots of the nursery (complete with Frankie's stuff still in the middle). I swear I have some of the other side of the room but my photo files are all unorganized after the camera fiasco. They get the point across. 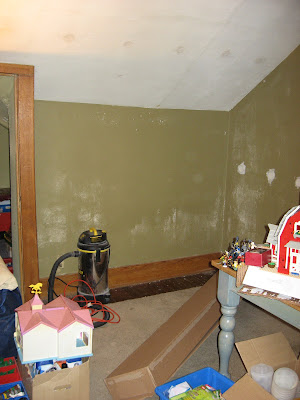 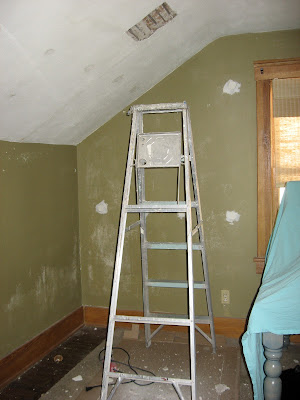 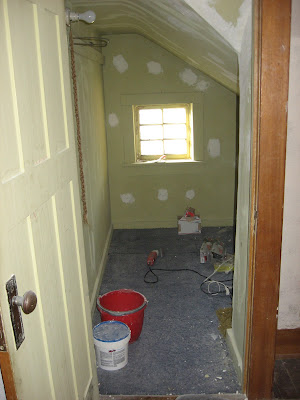 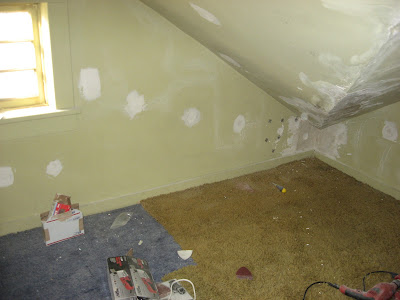 The insulation plugs are all still obvious, paint from 1943 in the closet, slightly newer in the bedroom and the gross mismatched carpet seen here. Definitely NOT a cute or even usable nursery.

The biggest dilemna was the slightly wiggly plaster on the ceiling. The plaster keys had pulled away from the lathing in several spots from moisture (the roof had been in disrepair at least once in the house's lifetime), settling and just because it is 100 years old. My dad's plan was to knock down the loose areas, which included most anything that was at an angle. Ugh, what a mess and a lot of work! There were only a few old and somewhat repaired cracks in those areas plus nothing we replace it with will ever be as good as that 100 year old plaster so I felt it a shame to knock it all down. There had to be SOMETHING easy out there to help us with this problem and with a little Google search I found these glorious objects known as plaster washers.

Everything I read about them said I wouldn't be able to find them at the hardware store. But surely the Ace down the block has them? With all of these old houses in the neighborhood, it seems like something they should have. Everyone was correct. We got strange looks for asking and one guy had to look them up online to see if they did exist. He said they sounded pretty nifty but they didn't have any. Thank goodness for the internet. A quick trip to Amazon and they were at my doorstep less than a week later.
They supposedly will hold when just screwed to the lathing but since our plaster wasn't ridiculously loose or cracked into tiny sections my dad searched down the studs and screwed most of the washers into those. After about 15 minutes the ceiling was just as secure, if not more so, than it was 100 years ago. As I said, our ceiling was not horrible so I can't vouch for how they would work on super loose plaster but they worked fantastically well here.  For now anyways!! 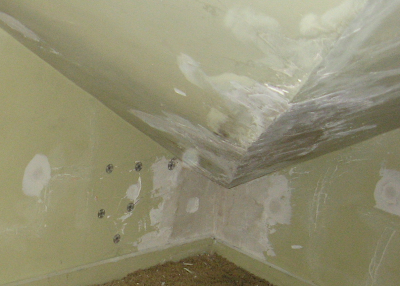 Here are some in action on the wall in the closet. They went in so fast I left the room to work on another project, came back and my dad had started plastering over them already! 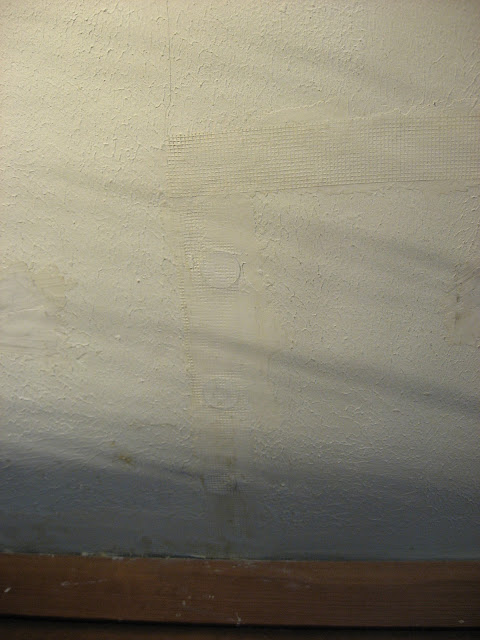 Some partially plastered washers on the ceiling.

Whew! Dilemma solved and a lot of extra work and mess avoided!
Posted by Cara at 10:22 PM 1 comment: