Since my grandpa passed away last week I think it would be appropriate to pay a little tribute to his (and grandma's) time capsule-esque home. He was almost 101 and would have still been living at home, fishing regularly and probably driving...if it were up to him. If it wasn't for his bad knees I believe he still would easily have been living there, minus the car keys.

I say capsule-esque because it is a teens bungalow my grandparents and the owners before them remodeled in the 1950’s through the 60’s. And when I say remodel, I mean repurposing the built-in buffet, painting, updating tile and changing the fixtures and appliances – none of this crazy lets blow out the walls and slap granite everywhere stuff.

My photos are kind of sparse since we were cleaning and it was a little cluttered so it was hard to get good shots. I’ll hopefully get more this spring/summer as we get ready to sell the house.
If anyone wants a sturdy bungalow with some 60’s flair (including a pink bathroom) in a fantastic Denver neighborhood let me know and I will keep you updated! I would move in myself but Mark doesn’t want to move 500 miles away. Something about his family all being here and the fact we already have a house along with some other excuses.


Moving on to the post: I am a little jaded by the thrifting, antiquing and garage saleing I have done my entire life so it takes something really crazy and weird to get me excited, not to mention distract my attention away from a box of vintage Christmas. My dad was cleaning grandpa’s workshop when he came excitedly up the stairs dangling something in front of him. At first I couldn’t tell what it was but when the first flash of pink caught my eye I did a little squeal. Yes, umm, outdated tile samples? That is what my nerdy self found exciting? The worst part is my dad KNEW I would be excited by this or else he would have casually left it on the counter downstairs with the other stuff he thought we should look through to price for the estate sale or toss. 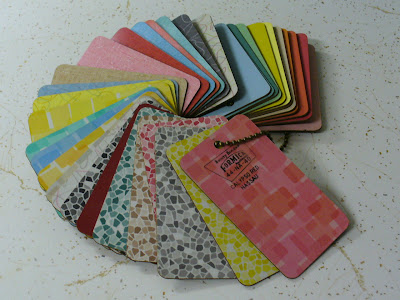 (Yes, I was being clever and photographed it on the gold veined and speckled counter top)

Why did grandpa have these lurking in the corner of his workshop? My guess is they came in a garage sale box of man stuff he bought and he just knew he would have a use for these colorful squares someday. I think we might be related somehow? 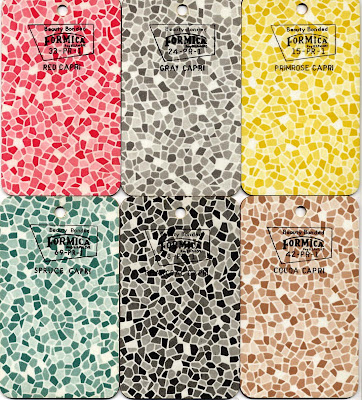 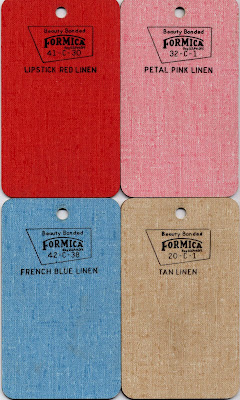 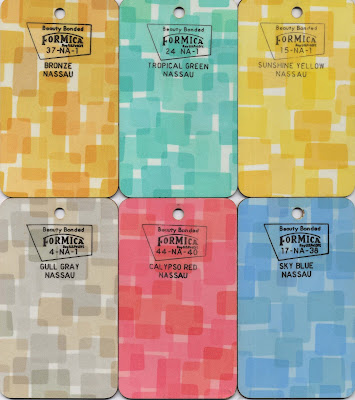 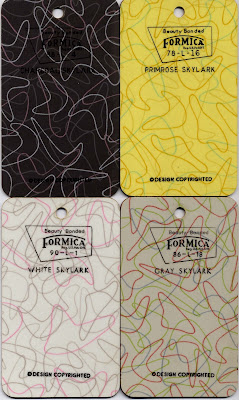 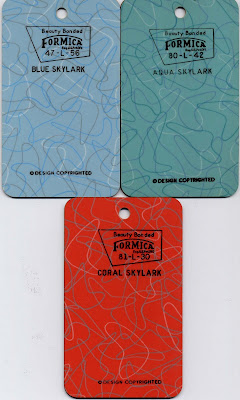 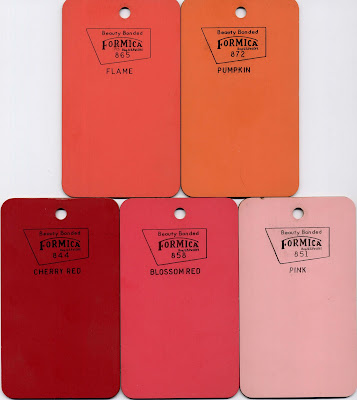 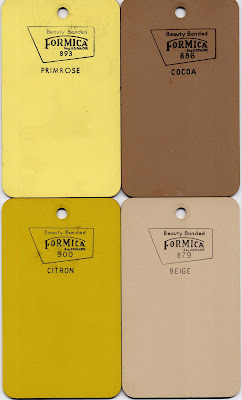 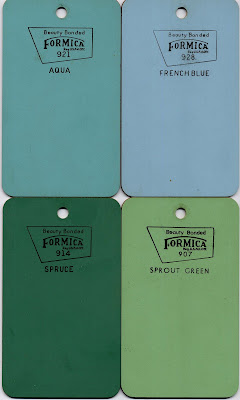 I can't decide which I would have chosen as my counter had I been creating a kitchen at the time. Maybe Lipstick Red Linen? though a plain color with some coordinating would be fun. Boomerang, er, "Skylark" is one of my all time favs so I would have probably gone with that in Aqua well, maybe coral or primrose?